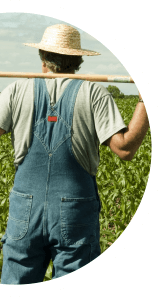 Gageleer is the first modern Belgian beer to trace its roots back to the historical herb beers. It started in 1980: “We wanted to know what a medieval beer tasted like and found inspiration in the 16th century Book of Herbs by Belgian botanist and physician Rembert Dodoens”, says Louis Meulders. Louis is a home-brewer who found and fine-tuned the recipe.

Louis is also one of the founders of the Gageleer company: “During the middle ages beer was healthier than water. It was flavored with a mixture of herbs found in the area. The main ingredient of this mixture was always bog myrtle, in Dutch ‘gagel’, which gave the beer its bitterness and a longer shelf life.”

The road to produce Gageleer beer was long but successful – from the first bottle brewed in a garage in 1988, then the first commercial sales in 1996, to producing 150.000 liters twenty years later.

In 1997, five members of the Belgian nature volunteer organisation Natuurpunt raised the capital to found a cooperative, with the goal of marketing Gageleer to fund the purchase and conservation of nature reserves in the Belgian Campine. All profits of sales go to nature preservation.

There is also a link between the beer and nature management. In 2014, volunteers of Natuurpunt pulled out hundreds of young trees in nature area ‘De Korhaan’ (Arendonk, Belgium). This area, a typical moorland, is home to the myrtle herb. Every now and then, human interference is needed on top of grazing management, to promote the development of heather, rejuvenate the myrtle vegetation and to ensure the area does not transform into a forest. Despite its ever growing popularity and turnover, the cooperative company is still run by the same founders on a voluntary, unpaid base.

Gageleer is a certified organic beer. In 2012 the original cooperative transformed into a company with a social objective. In the same year several organic farmers started supplying fully organic barley to the brewery.

The organic farmers practice agriculture in ways that are sustainable and environmentally friendly. They work in harmony with nature, aiming for fertile soil, healthy water and clean air. Louis Meulders: “By using locally grown, organic barley, we support the local economy and minimize our ecological footprint. We have a passion for beer and a passion for nature.”

Natura 2000 is the largest network of protected areas in the world. People living in and around Natura 2000 areas utilise these for a variety of economic activities. Designation of Natura 2000 areas often creates additional restrictions though, sometimes leading people to perceive Natura 2000 as a burden. One solution to this problem is to make products coming from Natura 2000 areas better known and more appealing to the public and increase awareness of the benefits these products provide for nature and for people working in Natura 2000 areas.

This website is part of a Natura 2000 branding campaign, stressing the benefits Natura 2000 can provide to local economies. It showcases products produced in Natura 2000 areas accompanied by inspiring background stories about the collaborations and socio-economic benefits related to those products. By sharing these successful and positive stories the campaign aims to trigger new partnerships between site managers, farmers and local businesses, and improve perceptions of and increase support for the Natura 2000 network.